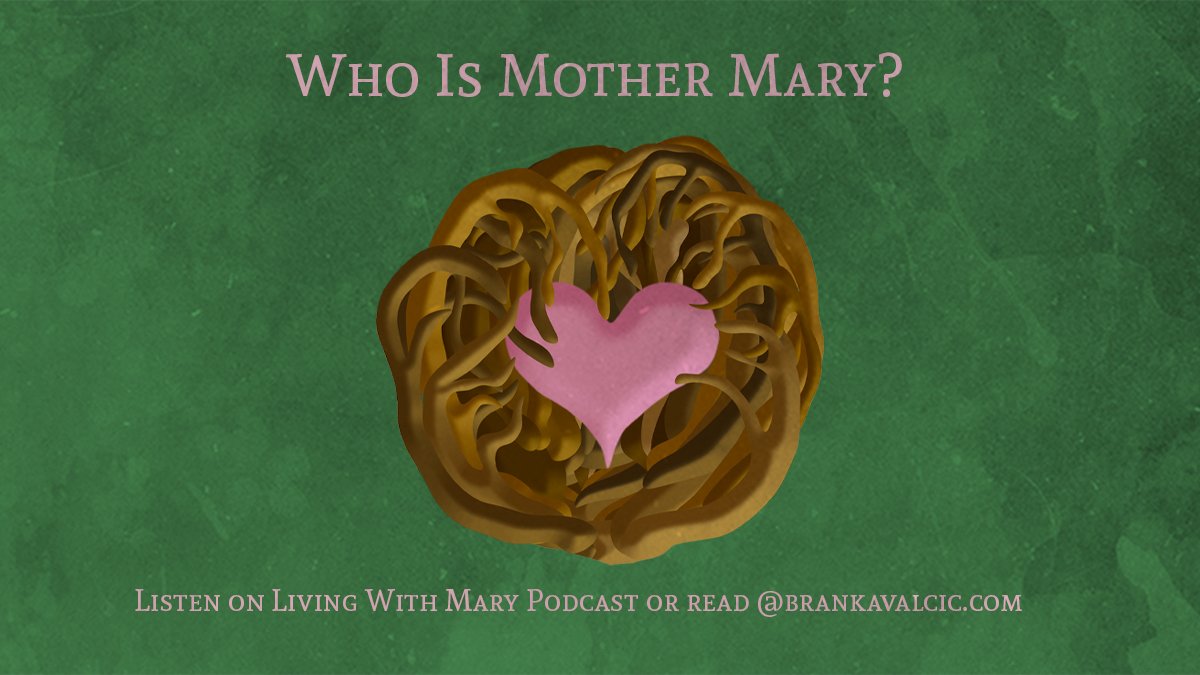 Recently, I received an email from someone whose mailing list I am on that touched me deeply. The author was so honest and showed me, once again, what it means to stand in one’s truth – no matter what.

Several years ago, I stood in my truth and told the world that I believe Mother Mary speaks through me. This took a lot of courage. I asked many times why couldn’t I have just channeled Mary’s energy without saying that she comes through me. Yet, for all my resistance, I knew what I needed to do – to come out, to set myself free, to share what is mine to share, to be a rather ordinary girl doing something we may think is extraordinary, to pave a path for others, to have the guts to say it out loud: I am a channel for Mother Mary. Come what may.

Truth be told, nothing spectacular happened. No inquisition knocked on my door (unlike in some other lifetimes), no one even scorned me for this. Don’t get me wrong, I am not complaining, I feel immensely grateful. Mary has told me when we began that this is a different lifetime, yet the fear was tangible, paralyzing at times. Several years later, saying that I am a channel for Mother Mary feels like second nature to me.

Falling Into a Trap

But there is something else I want to talk to you about today. And it’s this:

When I say that I am a channel for Mother Mary, some people ascribe to me qualities that they think Mary had. I know most of them don’t do it consciously and it’s not really about them. It’s that a part of me thought I too needed to have these qualities in order to be her pure channel. And since I haven’t had them, I felt like an imposter towards others, and unworthy of this great task when it came to my own standards. I felt people probing me to see if I can uphold these values and I saw myself judging myself for not being as loving, as kind, and so on, as I thought I needed to be.

At some point, I started not enjoying channeling Mother Mary anymore. I mean, I did enjoy while I channeled her – I LOVED THAT, but while not channeling I felt I was not doing this channeling thing right. Somehow, I retreated. I needed space from it all. I also needed to figure out if I wanted to continue channeling Mary and if so in which way.

This entailed going further into my relationship with her and to answer the question who is Mother Mary to me? How do I see her and why? What part of my understanding of her comes from others and what is truly my own? Who is she and who am I?

I’ve been asked many times how I knew it was Mother Mary who called me to her, guided me, and eventually spoke through me. I’ve also been asked how I know it’s Mother Mary at all. The first question is concerned more with the details of how, taking at face value that it was Mother Mary, while the latter question really is about are you sure it’s her, doubting that it is, even asking in its hidden depths whether there is Mother Mary as such and if so how would you ever know. I understand both questions very well. I’ve asked them myself many times.

Many of you know that I worked as a university professor and that my mind was quite skeptical of this whole Mother Mary thing. I had to teach my mind, and my mind needed to experience things – tangibly, concretely, in order to make some sense of and be ok with it at all. And still, I would say that it is not a mind thing, at least not a rational mind thing. Because some of it, or even most of it, relies on things that are not tangible. Ultimately, it is one’s own truth, felt deep within the heart as unequivocal. It is this truth in this deep heart-space where I feel at peace, light, soft, and where I simply KNOW. There are no questions, no explanations needed. It just is. And I know it. I get it. Stepping outside of this place, the many tracks of my mind fire up, asking, probing, and seeking understanding. This too is all right, because it makes me seek understanding, probe, see if I’ve gone crazy, and ask if I really truly feel this as my truth.

Who Is Mother Mary to Me?

For years, as I started out as Mary’s channel, I wasn’t interested at all in what others said about her. I wanted to feel what I feel and know her the way I know her. And this was awesome. The depth of my conscious relationship with her depended on how much time I put into spending with her. I continuously asked her to help me feel her more. I learned to recognize different energies. Her energy has been energy I have felt for years before but didn’t know it was her. No, it wasn’t in the Catholic Mary that I felt her (as someone suggested to me – of course, you thought it was Mother Mary, you grew up Catholic), it was in my Kundalini Yoga practice. Her energy is, of course, part of the Great Mother’s energy, part of the Divine Feminine and I felt her in the sea, in the forest, in flowers, trees… I felt her within me, like strong waves and gentle lullabies. I felt her to be ancient, I felt her to be completely new. I felt her in the sorrow, and in joy. I felt her in the soft moonlight. She spoke to me in the language of my soul. She spoke to me from within my heart. Always calling me to love more. To love life. To love others. To love myself.

Keeping Myself on My Toes

Yes, many other beloved Beings of Light can be felt like that, and in these places. Yet, there are distinct strands of energy, distinct flavors that each of them has, although of course, they are One, in the same way, we humans are each a unique being, but ultimately connected in the One. I learned to tune into her energy, to draw more of it into my being, body and mind, to allow her to speak without stopping her because she is saying things I would never say. She felt natural, real. And yet, it was only my feeling, my truth. Could I be wrong? How do I know it’s her? What do others say about her?

How Much We Don’t Know

And so I dove into literature. From impeccably researched Truly Our Sister by Elizabeth Johnson to fully channeled Anna, Grandmother of Jesus by Claire Heartsong, from gospels, mystics writings, to my own channelings of Mary, and much else. I realized how little was actually written about Mary’s lifetime on Earth. How we don’t really know how or who she was. How personal most of what was written really was.

Yet, she doesn’t have a personality, not in the way we as humans do. She is not human. She is a Being of Light. One whose Light is pure Love, Nurturing, Beauty, Understanding, Empowerment, Grace, and Peace. And none of these qualities are in her in the way that we perceive them.

But then Again, We Do KNOW

When we stop to listen and to feel, we KNOW her in our hearts. We’ve known her always.

I have to say that this belief that feelings are less than thoughts, that untangible is less than tangible, that inner knowing is less than experiencing from the outside, fully does not work for me. I catch it. Yes, I just said – it was only my feeling (not thought), my truth (not some scientifically- confirmed result), but I am aware that this belief comes from our collective ways of the last couple of hundred years, and my own upbringing. There was a time when intuition and inner knowing were immensely cherished and honored. There was a time when it was quite normal to be conversing with Spirit in its many forms. There was a time when we remembered we were spiritual beings and that these seemingly extraordinary things are not only possible but natural and part of who we are.

And so, I invite you to drop into your heart and ask Mary about who she is to you so that you can deepen your own conscious relationship with her based on your experiences and your heart’s truth. (I hold the space for you at the end of the episode, if you wish to do so).