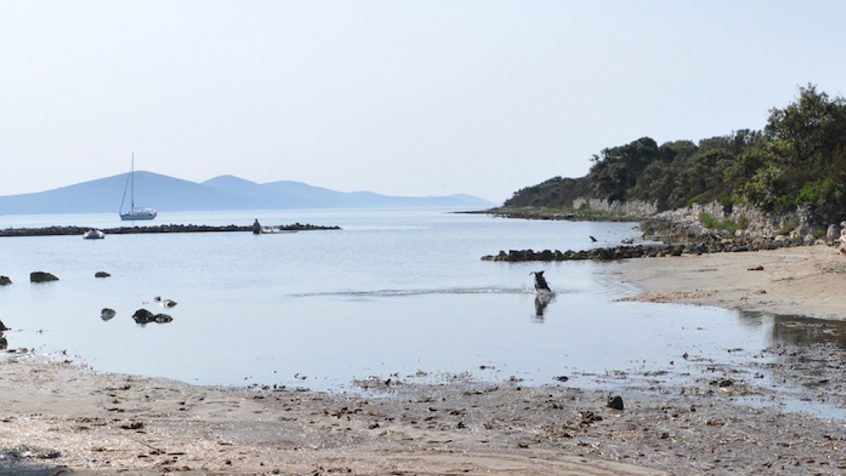 When I said my dog wakes me up early (in the post Embracing All Moments) was I thinking as early as midnight? When one went to bed at 10:30 pm after a long day at sea, does midnight count as early or simply as NOT COOL?

Yesterday, we anchored in a bay with beautiful sandy bottom that makes the sea look unreal. But more importantly, this bay has a quite large, shallow bit with rotting, deliciously smelling seaweed, baby fish and who knows what else. Even before we anchored, Luna the dog was perched as far on the bow as she could be with her ears flying and her nose high in the air. She spent a large part of the day in that seaweed pit, running through it, sniffing at it, burying her head in it. When she wasn’t there, she mournfully stared in the direction of her Shangri La, whining all the while.

At midnight, when we were all fast asleep, the dog wasn’t. I was awoken by the clickety-clack sound her nails made on top of my head. She paced the boat. I followed her whereabouts by following the sound of her nails on the boat’s surface. She sat down. She got up again. She paced some more. Mind foggy from sleep, I thought how obsessed she was with that stinky bit of the bay, whose odor now wafted into my cabin through the porthole. Grudgingly, I got up and navigated Luna the dog into the salon and onto the bench she usually snores at during night. As soon as I hit my pillow, she jumped off the bench and went outside. The nails started moving about again. Then she began to whine. I stormed out of my cabin and urged her to go back in. She ran away. We “played” the game of chase around the boat for a little while, until I finally caught her and took her to my cabin. I closed the door. Now she wasn’t going anywhere! She fidgeted on the bed, ending up panting heavily by my head.

I guess I knew all along that she needed to go out to do her business, but was trying hard not to admit that to myself. I cursed and got up again. Luna bolted out of my cabin. It was pitch black outside. To go to the sandy part of the bay, Luna’s Shangri La, we usually use the outboard on our dinghy, something I wasn’t inclined to do in the middle of the night with other boats in the bay. The rest of the shore is incredibly jaggy with spiky rocks hunching just beneath the surface for yards before the shore.

I woke up my husband. Would he row so I can attempt to take Luna out onto the jagged shore to do her business? Reluctantly, he agreed, not having much in the way of choice. I put Luna on a leash so she wouldn’t get it in her mind to run away across the rocks to her seaweed heaven. Helped by a flimsy flashlight, my husband navigated the maze of rocky outcrops to get us as close as possible to the shore. I clambered outside, conscious that a wrong step would earn me a nasty cut across my bare legs. I lifted Luna up and placed her on the rocks. Gingerly, we picked our way to the shore. Once there, she did her business immediately and I was grateful. It is a rare occurrence that she needs to go out in the middle of the night. It must be all that damn seaweed she ate yesterday!

Back in the dinghy, as my husband rowed us towards the boat, I giggled. In the dead of night, two people and a dog in a dinghy, under the starry sky. Senses heightened. Awareness complete. Moments when we are truly alive.

I write kneeling on wet sand while Luna prances about. It’s just after 6 am and the bay still has a sleepy feel to it. Where do you think we are? When Luna started to whine again, tired but excited to write my Boat Pages, I got up and motored us to this intoxicating place where land meets the sea – Luna’s Shangri La.