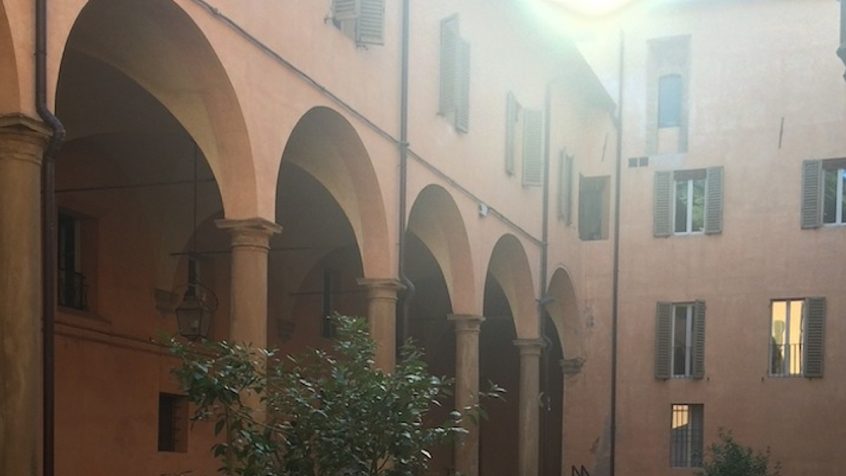 Last week, I traveled to Bologna. My husband was to attend a conference and Luka, my son, and I joined him with an intention to explore the city. I have never been to Bologna and was quite excited. I had no list of things to do while there, no plans, except to open myself up to the experience.

The outer world experience of Bologna was fantastic. Luka and I marveled at the food: wheels of cheese, mountains of ham, enticingly vibrant vegetables and fruit, bread, deserts. Mamma mia! We ate in small trattorias, and couldn’t get enough of pasta. Often we debated whether to have another plate of pasta Bolognese (my gosh, it was invented there!) or mascarpone. We were awash with the energy of politically active and open-minded students who gathered at the doorsteps of various university buildings, fully engrossed in one debate or another. We watched transfixed as speakers on the main square, who had things to say, took turns to stand on a small white plastic crate and speak while everyone else listened quietly and respectfully. I told Luka,

“This is something you’d never see in Croatia. Even if anyone had the guts to speak openly like this, the others would immediately insult him.”

And this brings me to the astonishing inner world experience I’ve had during this trip.

On our way to Bologna, we stop at a rest stop. And there amidst luxurious piles of chocolate, candy, toys, spices, and pasta, I feel something. A heavy feeling. Deep, deep in the bottom of my body, in the bones of my pelvis.

On the surface, I realize I don’t want people to hear us speak Croatian. Let’s speak English instead, I think. Then, I don’t want people to see our Croatian car registration plate. Quick, let’s pretend this is not our car! Let’s fantasize about moving to Italy and blending in, learning the language, buying their clothes, and copying their mannerisms. I pride myself for having lived in various countries around the world – I am a citizen of the world, for Christ’s sake, not one of them Croatians. I am better that those fucked up, backwards, negative Croatians…

I identify my emotions. There is fear, arrogance, anger. I let go of these emotions and associated clusters of thoughts, and there at the bottom of it all, I discover it.

What’s more, I realize, there has been shame all my life. My God, I am ashamed of being Croatian! I remember how as a kid I heard that at a border crossing to a European country our passports were frowned upon – or so it was felt. When shopping in Italy – something many people did back in the 80s because it was cheaper and there was actually stuff to buy – I was ashamed of my clothes. I felt people pitied me. I saw people pitying me regardless of whether they actually pitied me or not.

I have already written blogs about my relationship with Croatia (see Croatia the Beautiful, or Salty Sardines), but this was three years ago, just as we have moved back after living abroad for 13 years. Now, my relationship with this country has matured and I realize that in order for me to further grow as a person I need to deal with what’s going on within me. At the rest stop on our way to Bologna last week, I resolve to deal with my shame.

And so it is that later that day, in the old courtyard of Oratorio di Santa Cecilia, a patron of musicians, I stand in a ray of sun, which falls over the rooftop, listening to someone sing beautifully, and surrender to my shame. At first it is a tension at the very bottom of my belly. Then tension deepens to pain. It spreads into my pelvis, hip bones, travels up my belly and into my chest. It chokes my throat.

Stay with it. Stay with it. Layer, after layer, I stay with it. It is hard work, undoing decades of shame, the lowest emotional frequency, which has lodged itself into my body. I work at it, surrendering to and releasing my shame for a long time, until tension eases up and I am compelled to move. The Sun’s ray has disappeared behind the rooftop and a draft has found its way through the cracks. I get cold.

I know I am not done with this shame business, but by becoming aware of it and starting to release it, I have at least opened the lock. It’s a start I think, but in fact it is a leap, a giant leap towards freedom.

I cannot hide behind my arrogance, and I want to stop judging others. This means that I must stop judging myself. What I reflect, others see. It’s tricky and it’s hard facing yourself and your emotions at this level. Alas these emotions cannot stay hidden because they are a hindrance to becoming a better person, a more loving, caring, giving, peaceful, joyous person that I want to be – that I truly am.

I am determined to get to the other side of shame, guilt, fear, anger and pride, to courage, acceptance, understanding, and ultimately to lasting love, joy, and peace.

From there, the world, including myself, looks very, very different indeed.