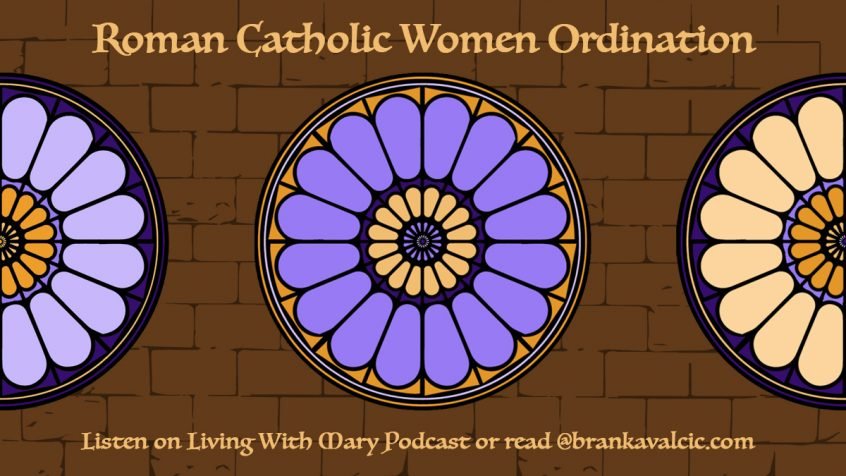 This is a slightly modified transcript from the Living with Mary Podcast episode Roman Catholic Women Ordination. Listen to the episode here:

Change Is in the Air

Soooo, today’s topic is Roman Catholic Women Ordination! Wow, just saying this I get a whole heap of emotions – excitement, wholeness, love, fear, and my thoughts kinda get fried a little at this seeming oxymoron. But then I think about this: A hundred years ago it was inconceivable for a woman to be ordained a priest in any Christian denomination. Today, 7 major Christian religious groups in the US ordain women, while 5 don’t. That’s progress! Yes, yes, I know, it could be more, but it could also be less! To me, this shows that the times are changing and that while it seems inconceivable now that women would be allowed by the Vatican to be ordained priests, there will come a time when this will change too.

Why? Simply because it is inconceivable that it won’t! Everything changes, always! A part of my brain pre-programmed by the myths Roman Catholic Church officials have been fostering for centuries, says no way. But reading through the contemporary theology works of, for example, Elizabeth Johnson, Mathew Fox, Sister Ilia Delio, Father Richard Rohr, and others, and seeing the women ordination movement in action there is a very palpable change happening already! What is so cool to me though is that the change is happening very much from within and includes Sisters, Fathers, male bishops, women lay ministers, theologians (male and female), and a whole host of activists groups.

And in my own way, I am joining them since a couple of weeks ago I have enrolled in a Master of Pastoral Ministry degree and I am sooo excited! The stuff I am learning – it blows my mind!!!

So, let me tell you a bit more about how I came to all this…

A couple of months ago, I participated in the Parliament of World Religions online. What astonished me was how inclusive it was, from all major world religions to paganism and Goddess worshiping movements. It seemed to have included virtually every organization engaged in spiritual teachings, uplifting through faith. And personally, to me the most amazing discovery there was the Women’s Ordination Conference!

Women’s Ordination Conference has been working tirelessly since 1975 on its mission and vision which is the ordination of women as deacons, priests, & bishops into an inclusive and accountable Roman Catholic Church. Their website is a treasure trove of fascinating information, from the history of women’s ordination in early Christianity to the present-day movement based on theology, archaeology, and Scriptures, and more.

Fascinated, I keep reading, keep researching and I get to find out that there are more than 250 ordained Roman Catholic Women Priests in the world today! Say what now???

As it turns out, it’s not just that there is advocacy and theological & archaeological works supporting Roman Catholic women’s ordination, but there is in fact a movement of actual ordinations of women. The story is that in 2002 a male Catholic bishop ordained seven women on a boat on the river Danube! The ordination was done exactly the way male ordinations are done, with the laying of hands in apostolic succession and so on. The only difference was that the recipients were women, not men. And yes, it had to be performed in secret because according to the Vatican, even though we are all made in the image of God, God somehow has a problem with women being priests. Of course, it’s not really God who has this problem…

Needless to say, when the word about women’s ordination came out, the rogue bishop was excommunicated. But the movement could not be stopped… So here we are 20 years later with nearly 250 Roman Catholic Women Priests, organized within a couple of associations, ministering to an ever-growing number of thriving, all-inclusive, non-dogmatic Roman Catholic communities around the world. Woo hoo!!!

Sure, there are many obstacles to be overcome… but as beautifully put in Dr. Ida Raming’s book 55 Year Struggle for Women’s Ordination in the Catholic Church the women involved “in illegal ordination, she believes, are a “prophetic sign of protest against discriminatory teachings and laws.”

When I saw a photo of an ordained Roman Catholic Woman Priest, I was so deeply touched that I started crying. My tears were that of recognition of an ancient truth within me, of gratitude to all these brave women who have held this torch of light and kept passing it on, and relief that here is the living God in action – God that loves and includes, instead of God that punishes and excludes.

Somehow, I am optimistic. I know that while God is a mystery that cannot be explained in words, we can feel God through love, and love not fear will have its final word. Just like the resurrection of Jesus has the final say and not his death.

Busting the Myths That Women Cannot be Priests

There is so much more to be said about this topic and I will continue to do so. But, for now, I want to share with you eight myth-busters Women’s Ordination Conference put together. I have found these super helpful in dispelling the myths many of us have grown up with, even if we never went to Church. The myths really have no leg to stand on. They are not rooted in the Gospels, early Christian tradition, or Jesus’ ministry on Earth. An overwhelming number of theologians today state that Vatican resistance to women priests has no theological justification. Let’s see why and how…

Myth 1: “Jesus chose only men as the Twelve Apostles, so priests should be men.”

Mythbuster 1: “There is no clear evidence that Jesus intended the Apostles to be priests. The women – like Mary Magdalene and the Samaritan woman – were also commissioned by Jesus to share the Gospel… Simply put, in the Gospels, Jesus did not ordain anyone.”

Myth 2: “The Church has never ordained women. It goes against 2000 years of unbroken tradition.”

Mythbuster 2: ”Concepts like ‘priesthood’ and ‘ordination’ developed over time. We can’t say that the early Church ordained women OR men to the priesthood as we know it today. But archaeological and written evidence from the early Church shows women holding positions of equivalent authority.”

Myth 3: “Women and men have different gifts, and roles, but are equal in dignity.”

Mythbuster 3: Basically, I think it’s best to not dignify this statement with too many words… Suffice it to say is that it “denies the unique ways each person manifests God according to their whole selves. It is a scientifically and theologically flawed argument used to unjustly keep women from the sacraments of Holy Orders. Women will never be equal in dignity if they are denied real equality in the Church. The truth: Priestly people come in all genders.”

Myth 4: “The ban on women’s ordination is an infallible teaching of the Church.”

Mythbuster 4: “For a doctrine to be infallible all bishops of the world must be in universal agreement about it. However, many bishops have “expressed support for women’s ordinations and the need for greater dialogue on the issue”. Watch the video to see some of their statements. My favorite is from the late Bishop Francis Quinn: “I personally think the Spirit is calling women to be deacons and priests, but the Spirit hasn’t yet communicated it to the teaching Church.” I would add that it probably has, but that some parts of the Church are either turning a deaf ear to it or simply have not heard it yet.

Myth 5: “Supporting women’s ordination means you’re against the Pope and the Church.”

Mythbuster 5: ”Many faithful Catholics have challenged the Church to change its ways when our understanding of the moral value of certain practices has developed.” Some examples include St. Theresa of Avila who tirelessly spoke out about Church corruption, Fr. Augustus Tolton who worked for racial justice, Mother Mary Lange who founded a Sister’s order for African-American women in the US, and Fr. Daniel Berrigan who was a radical peace activist. “To be a follower of Jesus means a willingness to make ‘good trouble’. The Church also teaches that a person must ultimately follow their conscience where ‘the voice of God echos in (her/his) depths’ even if it means disagreeing with Church teaching.” Canon 212 states that the faithful have “the right and even at times the duty… to make their opinion known to the rest of the Christian faithful”.

For me personally, this is not about being against, it is about being FOR: for togetherness, unity, equality, love… isn’t that the whole point?

Mythbuster 6: “Becoming a priest is about following a call – listening and responding to the voice of God in our innermost being. All people can discern a call to the priesthood and do. It is wrong for the hierarchy to put limits on God’s will on the basis of anatomical features.”

Myth 7: “Jesus was a man, and priests act ‘in persona Christi,’ so only men can be priests.”

Mythbuster 7: “Acting ‘in persona Christi’ doesn’t mean physically resembling the historical Jesus of Nazareth… We don’t ask priests to be circumcised, or Jewish, or carpenters…”

Myth 8: “Christ is the bridegroom of the Church, his bride, so priests must be men because the Church is a bride.”

Mythbuster 8: “This is a metaphor… not a literal description. We don’t need all priests to be men, any more than we need all other members of the Church to only be women…”

I am going to imagine an all-inclusive Roman Catholic Church and I invite you to do the same. Well, if that’s too hard, how about imagining for starters your own Catholic community as all-inclusive? Being a young woman who doesn’t need to be ashamed of her body, confessing to a man and feeling terrible, but rather knowing she is loved, utterly so, exactly as she is… Or what if you have lost your faith and the angry God makes no sense and you could find faith in an all-inclusive community without sacrificing your religion?

There is a whole world out there beyond the Canon Law, which in itself, a lot of it, is not based on the Gospels and the love of Jesus. There is a contemporary Catholic theology and a whole bunch of people, women, men, and non-binary folks building a better world together.

I get so happy just thinking about it!

In the next episode, I will be hosting Kate, executive director of the Women’s Ordination Conference. From them, we will hear more detail about the work of the Conference first hand, how they deal with the very real barriers and sometimes even hostility to what they are doing, and much more.

Thank you for listening!