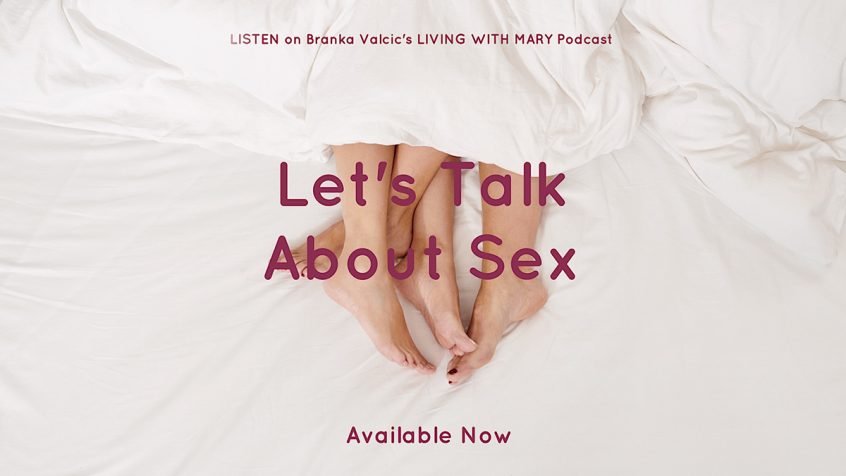 This is a slightly modified transcript of my Living with Mary Podcast episode “Let’s Talk About Sex”. Listen to the episode here:

I want to start by acknowledging how many terrible things have occurred through abuse of sexual energy. As a species, it has been a long while since we’ve known really what to do with this powerful energy. For millennia men have used power over women to experience sexual pleasure. Many men within various religious & spiritual lineages vowed to celibacy in order to raise above sexual pleasure, only to find themselves sexually abusing and raping others. Focusing on the Catholic Church here because that’s my background growing up and so forth…  Just a couple of days ago, we have learned that an estimated 330 000 children were sexually abused during the last 70 years in the hands of some 3000 priests and other people involved in the Church. Other countries (USA, Canada, Ireland) have already astonished the world with their findings.

Also, as I was preparing this episode, I received an email from the National Catholic Reporter to which I am subscribed. For those of you who don’t know the National Catholic Reporter is an independent news source based in the US, reporting on all things Catholic. In that email there is an article about Catholic colleges addressing sexual violence on their campuses, which is alarmingly high. A woman working at a Woman’s Centre at one of the Catholic colleges says: “What is amplified on a Catholic campus, however, is the culture of silence around sex,” she says. “At the four Catholic colleges I’ve worked at, I found that students often don’t talk about having sex. This silence extends to sexual assault. Many victims, afraid to reveal to university administrators that they are having sex, often do not report sexual assaults.”

So because having sex is bad, we are not going to talk about that, which leaves the ground wide open for sexual assault! Wow!

Let’s talk about sex, you guys and gals!

Sure, intimate details of one’s sex life are personal and private and a person can share what they want, if they want (like anything else!). But why is it so crazy or inappropriate to meet a friend in the morning for a cup of coffee and say: wow, I’ve had such a great orgasm last night! I mean, we say, oh I had a great date last night. Or my coffee tastes delicious, or the sun on my skin feels so delightful… these are all feelings, intimate even, and we share them without even thinking. So, what’s wrong about having a great orgasm and sharing about it?

How many of you would feel something within them stopping them from saying this sentence in a casual conversation in a coffee shop: wow, that orgasm last night, it was amazing! I certainly would. Sure, there are those amongst us who do that and kudos to them. But most of us don’t. Why? Shame, guilt, limiting beliefs expressed in statements and Questions like these:

People will think I am a whore, the devil’s temptress, you know?

Someone may think I am easy and will try to take what’s not his to take. As if just talking about sex makes one open for business. I mean she was asking for it, they would say, talking about orgasms and all.

Another question would pop into my mind: what is wrong with me??? Why am I feeling sexual arousal, sexual pleasure?

I never had anyone from my family when I was growing up tell me that this is bad (which was fortunate, unlike many girls I know who were told this outright: don’t touch yourself!), yet the first time I felt sexual energy as a girl I felt utterly ashamed and guilty. Gosh, what is wrong with me??? And then what do I do with it now???

This stuff is in our collective energy field and affects as all, whether we are aware of it or not. For me, stories told during catechism, including the story about the Virgin Mary, as well as the subtle, implicit behavior and language of the Church, played a huge role in developing feelings of unworthiness and shame and guilt about my sexual parts and sexual energy.

How We Got Here

Recognizing that it is not only women and girls who get sexually abused, I do want to share with you some incredible statements about women I read while preparing this episode. Not at all subtle, these statements are important building blocks of the Catholic Church whose venom has been plaguing our Western Society for centuries:

St. Jerome, a well-known Biblical scholar, proclaimed a saint at that, also known for translating the Bible from Hebrew into Latin (by the way, saying that he changed and omitted stuff that already was in there because he thought it was heretical). His points of view apparently were that “woman is the root of all evil.”

St. Augustine wondered why was woman created at all and concluded that woman was created purely for procreation and for nothing else.

According to the theologian Origen, women are worse than animals because they are continuously full of lust.

St. Clement of Alexandria wrote, that in women, “the consciousness of their own nature must evoke feelings of shame”.

Let’s be clear though that it wasn’t just Christian writers who had such ideas about women, for example the well-known philosopher Aristotle who we learn about in school actually write that women were a lesser form of life than men.

At any rate, while ancient Greeks were into pleasure (albeit heavily to the men’s advantage), in the eyes of the early Christian writers and Church’s Fathers sex was a sin of flesh, and only OK (though not in all circumstances) for procreation. For the most part, this is still how sex is viewed by the Church. Yet for all its trying to push the sexual energy away, the Catholic priests continued to obsess about it, many times obtaining the pleasure from another against their will.

Time to Heal, Time to Learn

Now, it’s important I stop here to say that what I am doing here is not about blaming men or the Catholic church, I mean for all I know I could have been one of them in a past lifetime. No, this is about moving forward by acknowledging and healing our past, and our present.

Today, in the Western World people are obsessed with sex and yet there are all these underlying layers of shame, guilt, fear, power dynamics, and ignorance that are perpetuating sex as something bad even when it feels good!

And so we don’t really talk about it. I mean we do, in hushed up tones, lest someone overhears us, even when we are alone! For example, why are we lowering our voices when mentioning sexual parts (unless we are at a doctor’s)?

Let’s free ourselves from this ridiculous and utterly tragic perspective that has worked in favor of some (although I actually believe not in the long run). Let’s demystify and shed light on sexual energy, on our past and present relationship with it, so we can walk freely into the future.

It’s not. It is time we healed our wounds and transformed shame and guilt into love.

It’s time we learned about sexual energy and what can we do with it that doesn’t not cause harm to others, but brings more love.

Dare to Dream, Dare to Speak

Imagine if you were not afraid of being who you are – fully. Imagine your choices were respected. Imagine you loved your body fully. Imagine having mind-blowing sex and cosmic orgasms that help you feel that connection to God/Goddess and all of Creation you’ve been yearning for? That stopped your mind and brought you full into every cell of your body and from there into expansion with the whole Universe. The great love, the sweet powerful nectar, bliss and ecstasy of being alive in a body while knowing you are connected to the whole Universe, an amazing, cherished part of the Universe. Imagine freeing up the sexual energy for creative projects in your life, for better health, increased immunity, less stress, feeling of being in the flow, more love…

Right? How awesome would that be???

We can get there, but we need to start. And one way to start is by starting to talk about it more openly. So, let’s talk about sex – however little or a lot we feel we can. Let’s talk also about our shame, our guilt, our fears, our wounds. I know it’s hard. But let’s talk about how good sex feels (whether alone or with a partner). Let’s bring back free usage of sexual parts into our life. Let’s work towards: wow, I’ve had such a great orgasm last night, as being a completely normal sentence!

And sure, it’s not all about orgasms, even though they are really pretty awesome, sexual energy can be used in different ways too (I mentioned some of them above). But I believe it’s important that we know there is nothing wrong with orgasms either, because some schools of sacred sexuality will go on and on about no orgasms, but from what I understand about sexual energy that’s too restrictive. We can learn to guide our sexual energy through our chakras and achieve what I call a cosmic orgasm and pure bliss without touching ourselves or feeling the orgasm in our sexual organs. But we can do both, and they are connected. So, let’s be open to learning about sexual energy and different kinds of orgasms…

Mary tells me live your life based on love. To me, a loving active honoring of God’s creation that is the body through self-pleasure or with a partner, is the ultimate love-based life!

Seriously. Let’s put things in perspective. Raping is bad. Forcing anything on another is bad. But having sex, enjoying intimacy with oneself or with another, experiencing the pleasure, how can that be bad??? I mean, of course, I encourage you to use your own judgment, but if what I am saying is resonating with you…

Let’s not have the bad stuff take away the gifts of sexual energy! Let’s work on building strong personal boundaries, mutual respect and love. And let’s enjoy the gifts we were given to enjoy – fully and freely. Let’s not have people from the past (even if that was ourselves) dictate how we live now and in the future! Who is with me?

Six Things You Can Do Now